Home You searched for bars-box 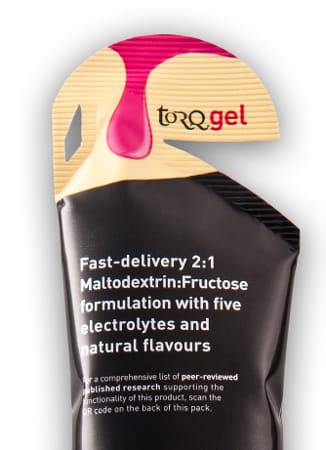 TORQ were very clever with this one. They had us all guessing for weeks before they announced that their new flavour energy gel is the delicious Raspberry Ripple!

Having been present during the TORQ Trail Team days, it was great to see everyone testing out TORQ’s existing range of energy gels, and the look of delight and surprise on their faces as they tasted them – Like a celebrity on BBC’s Saturday Kitchen after one of the resident chef’s has just rustled up something incredible – “mmmmmmmm, delicious.”

And now TORQ have done it again. Another amazing flavour that finds it self in very good company with Black Cherry Yoghurt, Orange and Banana, Strawberry Yoghurt, and the ever-popular Rhubarb and Custard… not to mention their sophisticated siblings, the Guarana-laced Forest Fruits and Banoffee.

The Raspberry Ripple also features a new, innovative design too. TORQ have reinvented their gel sachets with a clever opening, that only opens to a certain point of the packet, leaving the flap still attached. The concept behind this is to reduce littering that can often be a problem. Clever work!

It’s no secret that at Feetus, we love our TORQ products. This is why we have now stocked up BIG and started selling TORQ gels and bars by the BOX (not to mention as singles too!).

Variety is the Spice of Life

Can’t decide which flavour? Like to mix it up? No problem – We’re also offering all gels and bars in mixed boxes now.

So whether you’re a trail runner or a pavement pounder, a barefoot runner or an ultra-runner – you’re bound to need some TORQ!           ‘Fill yer boots’.

Have a question? Give us a call or fill out the contact form. We’d love to hear from you
Contact Us

We use cookies on our website to give you the most relevant experience by remembering your preferences and repeat visits. By clicking “Accept”, you consent to the use of all the cookies.
Cookie settingsACCEPT
Manage consent

This website uses cookies to improve your experience while you navigate through the website. Out of these, the cookies that are categorized as necessary are stored on your browser as they are essential for the working of basic functionalities of the website. We also use third-party cookies that help us analyze and understand how you use this website. These cookies will be stored in your browser only with your consent. You also have the option to opt-out of these cookies. But opting out of some of these cookies may affect your browsing experience.
Necessary Always Enabled
Necessary cookies are absolutely essential for the website to function properly. This category only includes cookies that ensures basic functionalities and security features of the website. These cookies do not store any personal information.
Non-necessary
Any cookies that may not be particularly necessary for the website to function and is used specifically to collect user personal data via analytics, ads, other embedded contents are termed as non-necessary cookies. It is mandatory to procure user consent prior to running these cookies on your website.
SAVE & ACCEPT
Shopping cart close